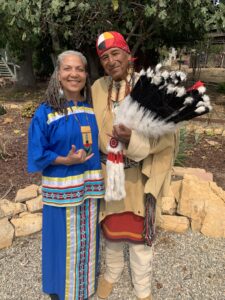 Daniel Ramos is a Producer of One Global Family’s Call To Action Broadcast Series ~ “SACRED ACTIVISM: Peace Sundays RevoLution.”  He is also a Board Member for both One Global Family Foundation & Alliances, as well as Unity and Diversity World Council.  Marcario Daniel ‘Cuauhltli Atoatzin’ (Eagle that Speaks) Ramos, is the Chief Spiritual Elder of the Choctaw Muskogee Yamassee Nation. He is Grandfather Uncle of the prophecy of “Warriors of the Rainbow” Tribe of the 4 Directions and 4 Sacred Elements of Life. Ramos was born and raised in foster care in East Los Angeles, and later adopted by the same beautiful family he was placed with. He attended public schools and received a Bachelor of Arts Degree from U.C.L.A. in 1975. Ramos is a Social Worker by trade with over 40 years of experience in various fields and served almost 20 of those years as a public servant with Los Angeles County Department of Probation, Department of Children and Family Services, and the State of California Department of Corrections, Parole Division, respectively as Deputy Probation Officer, Children’s Social Worker and Supervisor and Parole Agent.

Ramos also served the Labor Movement working for S.E.I.U. (Service Employees International Union Local 535 and then 721) as a Representative, Statewide Political Director, Advocate, Contract Negotiator, and Community Organizer for the remainder of his working career, filled with a passion and devoted to bringing justice, equity, and action on behalf of some of the most vulnerable and disenfranchised families and individuals in our community. He also devoted his servant life to volunteerism for several nonprofits in the community of Los Angeles County.

Ramos’s life’s work has always been heart-work. In June 2003, Ramos chose to enter the recovery walk of the “Red Road”. “Wanka Tonka” (Great Spirit) has given me the teachings and ceremonies of the Lakota (Sioux) people and the White Buffalo Prophecies to guide my Star path among others. I lead a ceremonial life that advocates teaches and emphasizes the White Buffalo prophecy of the great healing (Mending of the Sacred Hoop) of our world and ourselves in this cosmic time through the “Sacred Feminine”.

Having retired from the career walks in June 2014 to God’s full-time real-time work, his ceremonial life is traditional and non-traditional, and mostly ‘spirit-led’.  Since awakening in 2015 to what is happening in the 4 Sacred Element world, climate change activism is very important to him. Ramos advocates for sustainability, such as perma-culture off-grid living, and using solar, wind, and water as power. In July 2020 he trained hands-on for 11 days building an eco-friendly dome home structure using AirCrete through Domegaia.com.

Note:  Chief Daniel Ramos and Grandmother Alda Glover met in 2008, and birthed a friendship of high regard and great mutual respect. Grounded and supported by family and indigenous traditions and ceremonies that see all of creation as respected relatives, they share a vision of living and working for global peace and harmony, justice and equity, healthy people and planet.

As partners since 2018, they now grow together, honoring the sacred power of the Divine Feminine and the Divine Masculine, working and serving together as ONE, respectfully fulfilling their commitment to each other and their lives’ purpose to serve our One Global Family, to restore the health, and ensure the future of Humans, our relatives and this living planet that supports us all.