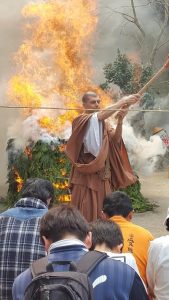 Nathan is a bit of a global citizen, having lived in seven countries and in multiple places in the US. Besides being a minister with UDWC, he is also ordained as a priest within the Shingon Buddhist tradition (A Japanese branch of Esoteric Buddhism.)
He received his MA in comparative religion, MDiv in Buddhist chaplaincy, and Ph.D. in History and Culture of Religions. He also received a certificate in advanced peace and conflict studies at European Peace University. He worked briefly for peace-related NGOs in Romania and Thailand. He also worked as an editor for a small Buddhist publishing company. He is the editor of A Thousand Hands: Caring for Your Buddhist Community, among other works.
.
In his free time, Nathan especially enjoys reading and intensive meditation retreats. He has a curiosity to explore many topics in reading and in the mind. He is a strange fellow who enjoys long fasts in the wilderness or in mountaintop monasteries, exploring states of consciousness and speaking with ascetic practitioners.
Back to UDWC Boards and Committees Page
SearchPostsLogin
Rev. Dr. Thomas Hedberg
Robert Corsini
Ruth Broyde Sharone
The Cruel Knee
Awareness of self-care during the COVID-19 pandemic
Introducing ‘I Wish For You’: A new music video from Stephen L Fiske